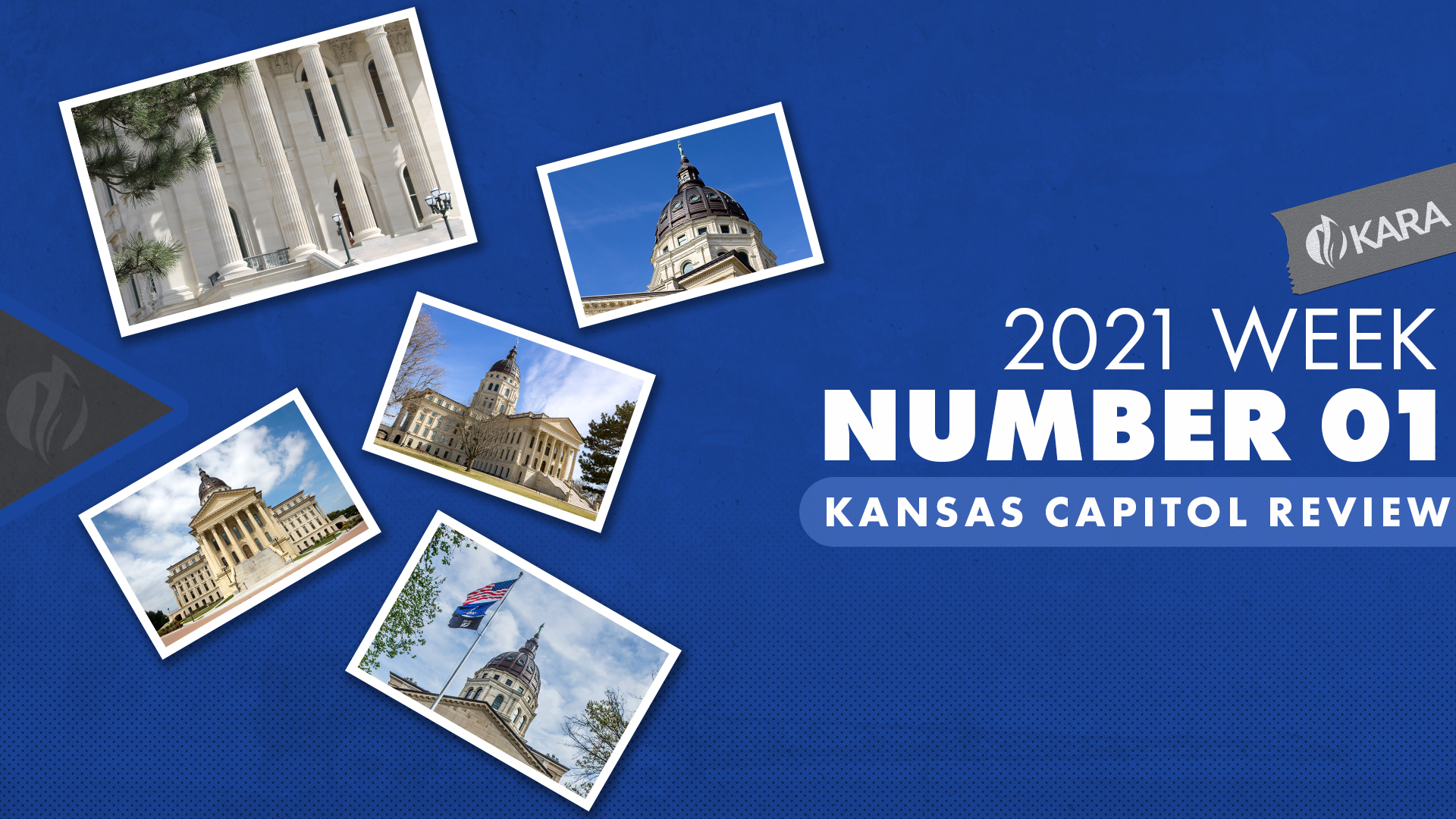 Posted at 16:08h in Advocacy by Editorial Team
0 Likes

The Kansas legislature gaveled in on Monday, January 11, 2021, and your association’s government affairs staff was at the capitol monitoring and weighing in on bills affecting our industry.

It was a busy week in Topeka which saw the swearing in of new members following the 2020 elections, a virtual State of the State address by Governor Laura Kelly, and the introduction of many new bills. Heading into the session, several controversial issues have been gearing up for prime time.

The Senate started off quickly out of the gate, passing two key legislative items to the House during the first week. Expect to see the most attention on amendments to the Kansas Emergency Management Act (KEMA) to respond to the COVID-19 pandemic, Medicaid expansion, property taxes, and a proposed constitutional amendment concerning the right to regulate access to abortion.

The end of the first week brought new security measures to the Capitol building – following the unrest in Washington D.C. – greatly restricting public access to the statehouse.

Governor Kelly gave her annual State of the State address virtually this year, due to COVID-19 concerns.

In her address, Governor Kelly focused on the impact of the COVID-19 pandemic and presented a – Framework for Growth – focusing on five key areas: small businesses, infrastructure, new job creation, agriculture, and broadband. She shared the accomplishments of the state in the past year, from small business grants to $12 million invested in the food supply system. She also commented on some of the highlights of her proposed budget, such as Medicaid.

The proposal would expand Medicaid for 165,000 Kansans utilizing a cost-share program with $19 million from the state and $541 million in federal funds. The Governor’s budget proposal also includes a 10-year extension in the payment schedule for KPERS (reamortization), unlocking $159 million for Fiscal Year 2022, but costing Kansans $4.6 billion in the long run.

Additionally, the budget would stop using state highway funds for state general fund expenses by 2023 – with a $133 million and $66.9 million draw in fiscal years ‘21 and ’22, respectively. At $600 million, the proposed budget maintains the required state general fund ending balance of proposed expenditures at 7.5%.

On Wednesday, the Senate Tax Committee held a hearing on Senate Bill 22, a bill that would exempt certain types of foreign corporate income from taxation (repatriated income and global intangible low tax income/GILTI) that is now taxable at the state level following passage of the federal tax cuts and jobs of 2017.

The bill, which is revised slightly from previous versions, would remove the state from rolling conformity with federal tax law for corporations. In addition, concerning the ability to carry net operating losses forward, the bill brings Kansas law in line with federal corporate tax law. The bill also contains a provision to ensure that Paycheck Protection Program (PPP) loans to businesses, through the U.S. Small Business Administration, are not taxable at the state level.

The Governor, in her State of the State address, intimated that she would likely veto this legislation again if it made it to her desk.

The proposed legislation would allow certain taxpayers, based on NAICS codes, to elect to use a single-factor apportionment formula based on sales to determine corporate income tax liability.

On Wednesday, the Senate Judiciary Committee held a hearing on Senate Bill 14 and the House Judiciary committee did the same with House Bill 2048. These bills extend certain provisions of the governmental response to the pandemic in Kansas.

Specific to businesses, it provides that if the business was in compliance with public health directives then it is not liable for contraction of COVID-19. Any civil action would require injury, not merely exposure, require higher threshold of exposure than inherent risk, and offers liability limitations for companies manufacturing PPE. In an effort to make the extension prior to its sunset date of Jan. 26th, the Senate Judiciary Committee advanced SB 14 to the Senate Committee of the Whole, which passed the measure on Thursday with emergency final action.

Your association joined with other stakeholders in support of this measure. It is expected that the legislature will use the extended timeline from this bill to make additional changes to the Kansas Emergency Management Act this session.

On Tuesday, the Senate Committee on Taxation held a hearing on Senate Bill 13, a bill which would require notice and public hearings in order for any taxing authority to increase taxes above their revenue neutral rate.

However, the bill also automatically repeals the existing property tax lid which requires a vote of the public to increase property taxes above a certain threshold. Other provisions in the bill would prohibit valuation increases due to normal maintenance, and allow the collection of partial payments or establishing payment plans for property taxes.

Last year, your association helped draft and introduce a bill to allow up to $50,000 from the agricultural chemical remediation reimbursement fund to be used annually for a new Pesticide Waste Disposal Program within the Kansas Dept. of Agriculture.

The bill made steady progress last year before being stalled out due to the shortened session.

This week, your association reintroduced the legislation in both the House and Senate Agriculture Committees, and hearings will be scheduled soon.

Last year, the legislature passed a bill which would have created a new Economic Recovery Linked Deposit Loan Program for businesses in response to the economic downturn caused by the COVID-19 pandemic.

This 10-year program will make up to $60 million available for low-interest (2% below market rate) loans to business. The bill, which was supported by Renew Kansas Biofuels Association, was vetoed by the Governor. The measure has been re-introduced this year in the form of Senate Bill 15 and House Bill 2069, and will be heard soon.

Last year, your association supported three bills concerning the state’s underground petroleum storage tank (UST) redevelopment funds which are managed by KDHE. One bill would have extended the existence of the UST redevelopment fund and compensation advisory board to 2032.

These bills made progress before being halted during the short session. This year, those bills were rolled into one bill, Senate Bill 27 which will be heard in the Senate Committee on Agriculture on Tuesday, January 19, 2021.

The bill would have also grant KDHE authority to assess civil penalties for failing to timely report hazardous chemical spills. Your association worked with KDHE to amend the bill last year, as Senate Bill 153.

While the bill failed to receive final passage, it will be reintroduced this year with our industry amendments.

The Senate Committee on Local Government heard from representatives of the National Conference of State Legislatures who reported that the Census Bureau is significantly behind in processing and distributing the 2020 census data.

Apportionment data for congressional districts was due to be distributed by December 31st, but proposed bills move that deadline forward to April. More specific data relating to demographics will likely not be made available until late summer or early fall.

Initial reports, however, indicate that Kansas is not likely to lose a congressional district. No official announcement will be available, however, until the apportionment data is released.

Click the link below to view all of the bills being tracked by your association. You can read a brief summary of the bill, the actual text of the bill, the history of the bill and upcoming actions. If you have any problems using the Bill Tracker, please contact Trae Green (trae@kansasag.org).