The Distinguished Service Award is Kansas Agribusiness Retailers Association’s most prestigious award given annually to recognize someone who has made a significant and notable contribution to our industry and/or our association. The contribution may be of scientific achievement, marketing, engineering, transportation or management, but it is not limited to these specifically. 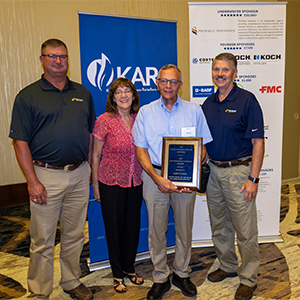 Gary attended and graduated from Kansas State University with a degree in agriculture economics in 1978. After a brief hiatus in Europe, he settled down with a job at a local fertilizer, grain and feed dealer in Farley, Missouri.

His real education began in Missouri as he did everything associated with fertilizer including application, mixing dry fertilizer and filling ammonia tanks.

After four years he had an opportunity to work for Farmland Industries, a regional cooperative located in Kansas City. He helped in the fertilizer equipment department in inside sales. Gary had a wonderful opportunity to learn from his supervisors who were the ones who helped design the original equipment used in anhydrous storage and application. His education led him to conduct ammonia schools as part of his job in a seven-state area. He still feels he learned from the best.

In 1987, he advanced his career by beginning with Fairbank Equipment based in Wichita, Kansas. After a few years he began again helping with ammonia schools in Kansas, Oklahoma, Nebraska and Texas as well as helping Fairbank with inside sales and purchasing.

In total, Gary estimates he taught around 15,000 students – many having heard his jokes several times over the years. He is proud to be part of the team who put together the new Compressed Gas Association’s national standard on handling Anhydrous Ammonia in 2014.

Gary is now retired, but still helps in giving ammonia schools, planning new ammonia facilities and troubleshooting problems that occur out in the field. 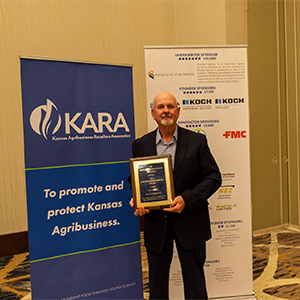 Dave retired at the end of 2018 after 42 years in agribusiness. He began his career in March of 1978 at an Evans Grain location, working at Jewell Agri-Services in Jewell as a floater operator and maintenance man.

Dave moved to Thurston Agri-Services, in Nebraska in January of 1986 – his first location serving as a manager, where he also became a Certified Crop Adviser in 1996, passing one of the first tests offered in the program.

A career stop in Owensborough, Kentucky introduced him to, in its infancy stages, precision agriculture. With a newfound knowledge of precision ag and the desire to stop moving so frequently, Wilcox contacted his old boss and friend, Frank Shelton, who was then Agronomy Manager at Farmway Coop in Beloit.

Dave was hired to develop a precision ag consulting program. Upon the industry’s growth, Wilcox, a few growers, Randy Taylor and Scott Staggenborg formed the Kansas Ag Research Association. Dave was on the original board of directors and was president in 2003.

At Farmway, he became distribution center manager, seed manager, chemical manager, then returned back to distribution center manager combined with ordering, pricing and program management of chemicals. He also oversaw all seed programs for the coop prior to its merger with Central Valley Ag. His role grew even larger upon the merger and he tirelessly worked until his retirement in 2018. Wilcox proudly served on the Kansas Agribusiness Retailers Association board of directors and was a key member of the Kansas Agri Business Expo committee for many years.

Kansas Agribusiness Retailers Association awarded its members a variety of awards from 1963 until 1988 when the Agri-Business Service Award, Education Service Award and Communications Service Award were combined into the Distinguished Service Award.