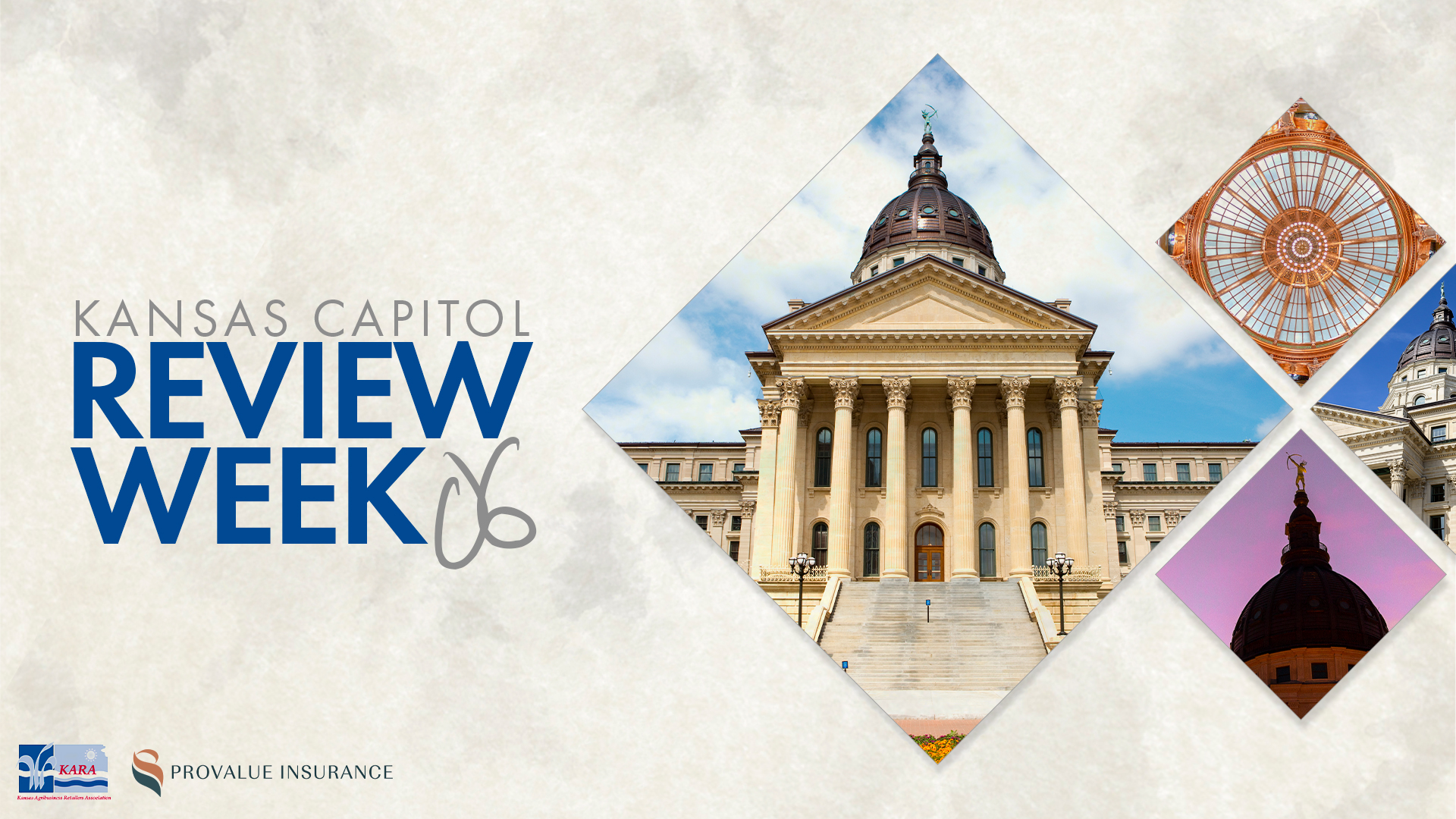 Posted at 09:40h in Advocacy by Editorial Team
0 Likes

This session, a proposed constitutional amendment on abortion is one of the highest priority items for both House and Senate leadership. The measure was passed by the Senate, but later failed by a very close margin in the House. Additionally, the Governor and a probable balance of legislators in both chambers are eager to pass Medicaid Expansion this year.

Following the failure of the abortion bill, House and Senate leadership have held up floor debate on Medicaid Expansion and most of all but a handful of other bills. Next week will be telling, as “Turnaround Day” occurs this coming Thursday, where all bills that are not otherwise exempt will dead for the year.

This week, the Senate Tax Committee passed the following bills out of committee favorably:

Hearings on the Kansas Department of Transportation’s next 10-year state transportation plan were held this week in the Senate Ways and Means Committee and in the House Appropriations Committee. The plan, called “Forward,” is set forth in House Bill 2588 and in Senate Bill 375. The plan replaces the now-expired T-Works program with a series of two-year reassessments of the state’s transportation and communication needs, including: maintenance and preservation projects, state highways, bridges, broadband and other communications and transportation systems. The initial phase of the program will include completion of the $435 million in T-Works projects that had been delayed due to budget shortfalls. The new program will be re-evaluated/restructured every two years to maintain flexibility and relevance with the needs of state/community/industry groups. Governor Kelly has stated her intention to no longer use money from the state highway fund to balance the state budget, but to use those funds only for transportation infrastructure.

On Monday, Feb. 17, the House Tax Committee held a hearing on HB 2553, a bill proposing to decouple from various provisions of the 2017 federal Tax Cuts and Jobs Act. The hearing was preceded by a clearly biased presentation from the department of revenue that taxing GILTI is not a significant shift in our state’s taxation of foreign income. Proponents to the bill included Cargill, and Ernst & Young, and the Kansas Chamber. The Chairman has indicated the committee would take action on the bill in the near future.

On Thursday, February 20th, the Senate Tax Committee held a hearing on SB 196. Currently, Kansas corporations, banks, trust companies, and savings and loans are allowed to claim an expensing deduction for investments in qualifying machinery and equipment that are placed into service in Kansas for tax year 2014 and thereafter. SB 196 would allow individual taxpayers (and LLC’s) to claim this deduction beginning in tax year 2019.

On Thursday, February 20, the House Committee of the Whole passed House Bill 2432 favorably on a vote of 122-0. The bill would establish the Kansas Pesticide Waste Disposal Program and Fund within the Kansas Department of Agriculture. The program would be funded by an annual transfer of no more than $50,000 from the Kansas Agricultural Remediation Fund. The bill now moves to the Senate for consideration.

On Thursday, February 20, the Senate Utilities Committee amended Senate Bill 126 and passed the bill out of committee favorably. The bill would exempt certain public utilities from paying an income tax and also exclude the utility from factoring the cost of this income tax in setting their utility rates. The income tax exemption under the bill would be a permanent exemption. The purpose of the bill is to lower utility rates and make Kansas more competitive. According to some conferees on the bill, the measure could save more than 2 million Kansas residential and industrial rate payers between $40 and $50 million every year in lower energy rates.

On Wednesday, February 19, your association joined with other industries in testifying before the House Ag Budget Subcommittee on a funding request for the Kansas Department of Health and Environment’s Bureau of Air Quality. The committee was asked to review the Bureau’s budgetary needs after the Bureau informed industry stakeholders that it intends to increase air quality emission fees on Class I and Class II emitters by approximately $1.5 million in 2020 and every year thereafter. On Thursday, February 20, the subcommittee amended the agency’s budget request to include an additional $300,000 from state general funds to cover the budgetary needs of the Bureau of Air Quality. The subcommittee will report the agency budget recommendation to the House Appropriations Committee next week.

On Thursday, February 20, the Senate Committee of the Whole passed the following bills favorably on a final action vote. These bills will now move to the House for consideration.

On Thursday, February 20, the House Committee of the Whole passed HB 2515 favorably on a final action vote. The bill would create the Kansas Promise Scholarship Act to provide scholarships for any Kansas community college or technical college student.

On Tuesday, February 18, the Senate Judiciary Committee passed SB 344 favorably out of committee. This bill would seek to remove the photograph requirement for all customers seeking to recycle certain types of metal listed within the scrap metal theft reduction act. The legislature had made amendments to the Scrap Metal Theft Reduction act in 2019 in order to extend the life of the program and require additional record keeping of certain scrap metal recycling transactions. A large scrap metal recycling company proponent stated that they wanted these changes because they were concerned with the privacy of their customers, and stated that the photograph requirement was overly burdensome.

On Thursday, February 20, the House Committee on Agriculture amended HB 2463 and passed the bill out favorably. Existing law provides the means by which a pesticide business may prove financial responsibility in order to obtain a license. As amended, the bill would remove the provision of a “letter of credit” from those means.

On Tuesday, February 18, the House Committee on Agriculture held a hearing on House Bill 2623, a bill which would promote pollinator habitat in solar fields. In consultation with other state and nongovernmental entities with pollinator expertise, the bill would require the state biological survey to publish a pollinator-friendly solar site scorecard which would be posted on the biological survey’s website. The bill would authorize the state biological survey to adopt rules and regulations for: 1) the selection, acquisition, management, protection and use of natural and scientific areas and preserves; 2) the registration of natural and scientific areas and preserves; and 3) the dedication of natural and scientific areas and preserves within the state system. Proponents included Natural Resources Defense Council, Kansas Biological Survey and Kansas Sierra Club. There were no opponents to the bill.

On Thursday, February 20, the Senate Committee of the Whole passed SB 270 favorably on a final action vote. The bill, which allows water rights that were certified after 2009 to be placed in multi-year flex accounts, will now move to the House for consideration.

On Friday, February 21, the Senate Committee on Agriculture and Natural Resources held a hearing on SB 449, a bill which removes cannabis products that contain up to a 0.3 percent concentration of delta-9 tetrahydrocannabinol (THC), on a dry weight basis, from the list of controlled substances listed in schedule I of the uniform controlled substances act. Under the bill, any product containing more than 0.3 percent THC would be defined as a controlled substance, and any product under that threshold would be defined as industrial hemp. The Kansas Sheriffs Association testified in opposition to the bill, and offered an amendment. It is unsure whether the committee will continue work on the bill.

On Thursday, February 20, the Senate Committee on Agriculture and Natural Resources passed SB 345 out of committee favorably for further action. This bill would amend the Commercial Industrial Hemp Act to establish the requirements for effective destruction of industrial hemp produced in Kansas by individuals licensed under the Act. The bill would require the Kansas Department of Agriculture (KDA) to develop a plan for disposal of industrial hemp with state and local law enforcement agencies and affected parties. This plan must be approved in advance by state and local law enforcement agencies. Employees or agents of the KDA could be required to be fingerprinted and to submit to a state and national criminal history record check for which the agency would pay associated costs. Local and state law enforcement officers and agencies would be required to assist in the taking and processing of fingerprints. The bill would also allow KDA and state and local law enforcement agencies to seek reimbursement for costs incurred in conducting this disposal.

On Thursday, February 20, the House Ag Budget Subcommittee took final action on the budget for the Kansas Water Office. The subcommittee approved a recommendation to transfer $7 million to the state water plan fund in state fiscal year 2021 ($5 million from state general funds, and $2 million from the economic development initiatives fund). The subcommittee will report the budget recommendation to the House Appropriations Committee next week.