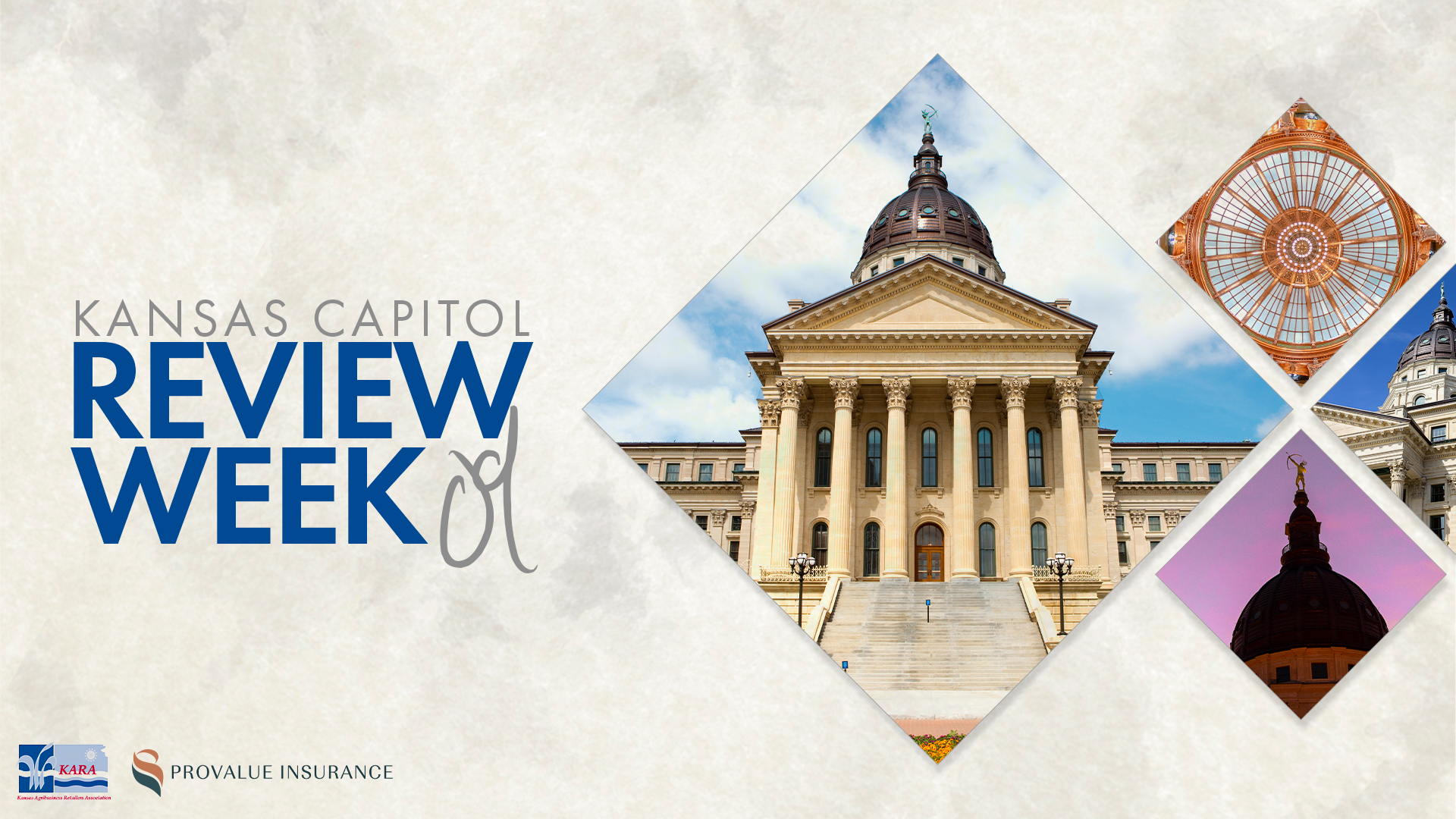 Posted at 07:41h in Advocacy by Editorial Team
0 Likes

With daily news of COVID-19 marching across the country, and concerns of a shortened Kansas legislative session, the pace of legislative activity quickened this week. Committees in the House and Senate each passed out bills on the base budget and on the state’s next transportation plan. Though gone for the weekend, legislators will consider these measures when they return on Monday. Next week will bring more quick work during the final days of activity for non-exempt committees this session.

Here are some of the highlights from this week:

On Thursday, March 12, the Senate Committee on Ways and Means passed out the FY 2020 and 2021 base budget bill Senate Bill 386. The bill contains appropriations for various state agencies, and includes funding for the State Water Plan Fund.

On Friday, March 13, the House Appropriations Committee passed out the FY 2020 and 2021 base budget bill House Bill 2597. The bill, which contains appropriations for various state agencies, was amended by the committee multiple times. One amendment would limit the regulatory authority of the Kansas Department of Health and Environment from increasing fees it imposes on industries to fund its Bureau of Air Quality. The agency had previously stated its intention to increase these fees on Class I and Class 2 air emitters up to an additional $1.7 million in 2020.

This week, House (House Bill 2588) and Senate (Senate Bill 375) Committees each amended, and passed out favorably, the KDOT “FORWARD” transportation plan. Each plans will be considered by the respective chamber before heading to a conference committee for final work.

Amendments by the House Appropriations Committee would change the name of the plan from “Forward” to the “Eisenhower Legacy” plan, and do the following:

The Senate Ways and Means Committee amendments to the plan would do the following:

On Tuesday, March 10, the House Committee on Utilities held a hearing on Senate Bill 126. The bill would exempt certain public utilities from paying an income tax and also exclude the utility from factoring the cost of this income tax in setting their utility rates. The income tax exemption under the bill would be a permanent exemption. The purpose of the bill is to lower utility rates and make Kansas more competitive. According to conferees on the bill, the measure could save over 2 million Kansas residential and industrial rate payers between $40 and $50 million every year in lower energy rates. The bill, which previously passed the Senate on a vote of 40-0, was supported by was supported by the Kansas Grain and Feed Association, Kansas Agribusiness Retailers Association, and Renew Kansas Biofuels Association.

On Thursday, March 12, the Senate Utilities Committee held a hearing on SB 437, a bill which would create the Kansas Electricity Bill Reduction Bonds Act (K-EBRA).  The bill would give the Kansas Corporation Commission the authority to authorize the issuance of ratepayer-backed securitized bonds in order to finance the retirement of existing generating assets in the state, as well as any replacement generation facilities necessary to replace the lost capacity and energy from the retired generation facility. The overall goal of the bill would be to allows for the lowering of utility rates by Kansas rate payers. Proponents of the bill included the Kansas Sierra Club, Kansas Industrial Consumers Group, and Climate and Energy Project. Opponents of the bill included the Kansas Corporation Commission, and Every. Opponents argued that they supported the idea of securitization, but this specific bill needs more work.

On Monday, March 9, the House Agriculture Committee held a hearing on SB 153. The bill would authorize KDHE to establish reportable threshold quantities of chemical spills in rules and regulations. The bill would also allow the agency to provide technical guidance during a clean-up response, and permit cost-recovery from the responsible party for any state expenses for response to a release.  The bill would also provide KDHE the ability to levy penalties for illegal dumping, the refusal of the responsible party to clean up a release, or the lack of timely reporting of a release. Stakeholders – including, Kansas Grain and Feed Association, Kansas Agribusiness Retailers Association, and Renew Kansas Biofuels Association – worked with the agency to amend the bill to limit the effect of agriculture chemicals, and limit the total amount of civil penalty authority.

On Thursday, March 12, the House Tax Committee passed HB 2517 out of committee favorably. The bill would allow a property tax abatement following a Governor-declared natural disaster when that natural disaster causes substantial or total loss to the property. Current law provides the tax abatement to residential property owners. Following a request by the Kansas Grain and Feed Association, the bill was amended to extend the tax abatement to owners of commercial property as well. The bill now moves to the full House for consideration.

Sales Tax Exemptions Given a Look

On Thursday, March 12, the House Tax Committee held a hearing on HB 2727, a bill which would require the Legislature to repeal, or suspend, an existing sales tax exemption of equal or greater fiscal liability in order to enact any new sales tax exemption that goes into effect after July 1, 2021. In addition, the bill would require sales taxes to be assessed and collected on various personal services, such as haircuts, nail services, tattoos, facials, diet services, hair removal, ear piercing, hair replacement, tanning salons, massage, etc.

On Tuesday, March 10, the House Tax Committee passed House Bill 2722 out of committee favorably. This bill would exempt employees who perform employment duties in more than one state from income tax withholding unless the earnings occurred in the state of the employee’s residence, or in a state that the employee performed employment duties for more than 30 days during the calendar year.

On Monday, March 9, the Senate Committee on Education held a hearing on HB 2515, a bill which would establish the Kansas Promise Scholarship Act to provide scholarships for students to attend community or technical colleges, the Washburn Institute of Technology, or any two-year associate degree program or technical certificate program offered by a private postsecondary educational institution that has its primary location in Kansas. The bill, which passed the House on a vote of 116-6, was supported by the Kansas Grain and Feed Association, Kansas Agribusiness Retailers Association, and Renew Kansas Biofuels Association.

On Thursday, March 12, the Senate Commerce Committee held a hearing on House Bill 2507, and then passed the bill out favorably. This bill limits a business’ exposure to liability from injury to a student participant in a school-sponsored vocational programs at the business’ worksite. The intent of the bill is to cover students during these vocational training activities in the same manner as they would be covered during school-sponsored sports activities. The bill, which now moves to the full Senate for consideration, is supported by the Kansas Grain and Feed Association, Kansas Agribusiness Retailers Association, and Renew Kansas Biofuels Association.

On Thursday, March 12, the Senate Agriculture Committee held a hearing on House Bill 2432, a bill which would establish the Kansas Pesticide Waste Disposal Program and Fund within the Kansas Department of Agriculture. The program would be funded by an annual transfer of no more than $50,000 from the Kansas Agricultural Remediation Fund. The bill, which had previously passed the House on a vote of 122-0, was supported by the Kansas Grain and Feed Association, Kansas Agribusiness Retailers Association, and various other agricultural stakeholders.

On Wednesday, March 11, the House Committee of the Whole passed HB 2490 on a vote of 118 to 2. This bill would extend the net operating loss carried forward period to 20 years (currently 10 years) beginning in tax year 2018.  The bill now moves to the Senate for consideration.

On Friday, March 13, the Senate Commerce Committee held a hearing on HB 2702, a bill which would decouple the High Performance Incentive Program tax credit from the requirement to participate in either the Kansas Industrial Training (KIT) or Kansas Industrial Retraining (KIR) workforce training programs. The Division of the Budget states the bill would give the Department flexibility in using dollars from both the KIT and KIR programs. It is assumed that there would be an increase in those who qualify for the HPIP investment tax credit since there is no longer a training requirement and only the wage standard requirement. The Department of Commerce determines who would be qualified for the High Performance Incentive Program.

On Tuesday, March 10, the House Committee on Agriculture heard and then took favorably action on SCR 1614. This Resolution supports Kansas farmers in the Rattlesnake Creek sub-basin in their ongoing effort to protect their water rights and livelihood through a collaborative solution to the region’s water impairment issue. Multiple agricultural stakeholders testified in support of this measure, including the Kansas Grain and Feed Association, Kansas Agribusiness Retailers Association, and Renew Kansas Biofuels Association. The resolution now moves to the full House for consideration.

On Wednesday, March 11, the House Agriculture Committee held a hearing on SB 270, a bill which allows water rights that were certified after 2009 to be placed in multi-year flex accounts, or MYFA’s. These tools, which were initially passed in 2011, allow farmers to conserve water in wet years to be used in more dry years over a five year period.

On Thursday, March 12, the House Committee on Agriculture held a hearing on Senate Bills 285, 286 and 287. The Committee took final action on the bills, placed the contents of SB 286 and SB 287 into House Substitute for SB 285, and then passed House Sub for SB 285 out of committee favorably. Kansas Grain and Feed Association, Kansas Agribusiness Retailers Association, and Renew Kansas Biofuels Association were proponents. As amended, House Sub for SB 285 would: extend the existence of the UST redevelopment fund and compensation advisory board to 2032; amend the Kansas storage tank act by extending the sunset of the aboveground fund and the underground fund and increase the maximum reimbursement; and, amend the Kansas storage tank act by extending the expiration of certain reimbursement provisions to 2030 and increase the underground storage tank replacement reimbursement maximum.

On Wednesday, March 11, the Senate Utilities Committee held a hearing on HB 2618, a bill which would establish the state broadband deployment grant program in the department of commerce to encourage the deployment of broadband in the state. The bill was introduced following multiple meetings of a legislative broadband task force in 2019. Funding for this cost-share grant program would be included in KDOT’s transportation plan. The bill had previously passed the House on a vote of 120-5.

On Tuesday, March 10, the Senate Committee on Ethics, Elections and Local Government held a hearing on House Bill 2510. The bill would establish a procedure for a city or county to assume the powers, responsibilities, and duties of any special district located within the city’s corporate limits or county’s boundaries and dissolve such a special district if approved by a joint resolution adopted by the city or county and the special district. The bill was supported by the Kansas Grain and Feed Association, Kansas Agribusiness Retailers Association, and Renew Kansas Biofuels Association. On Thursday, the Committee passed the bill out favorably.