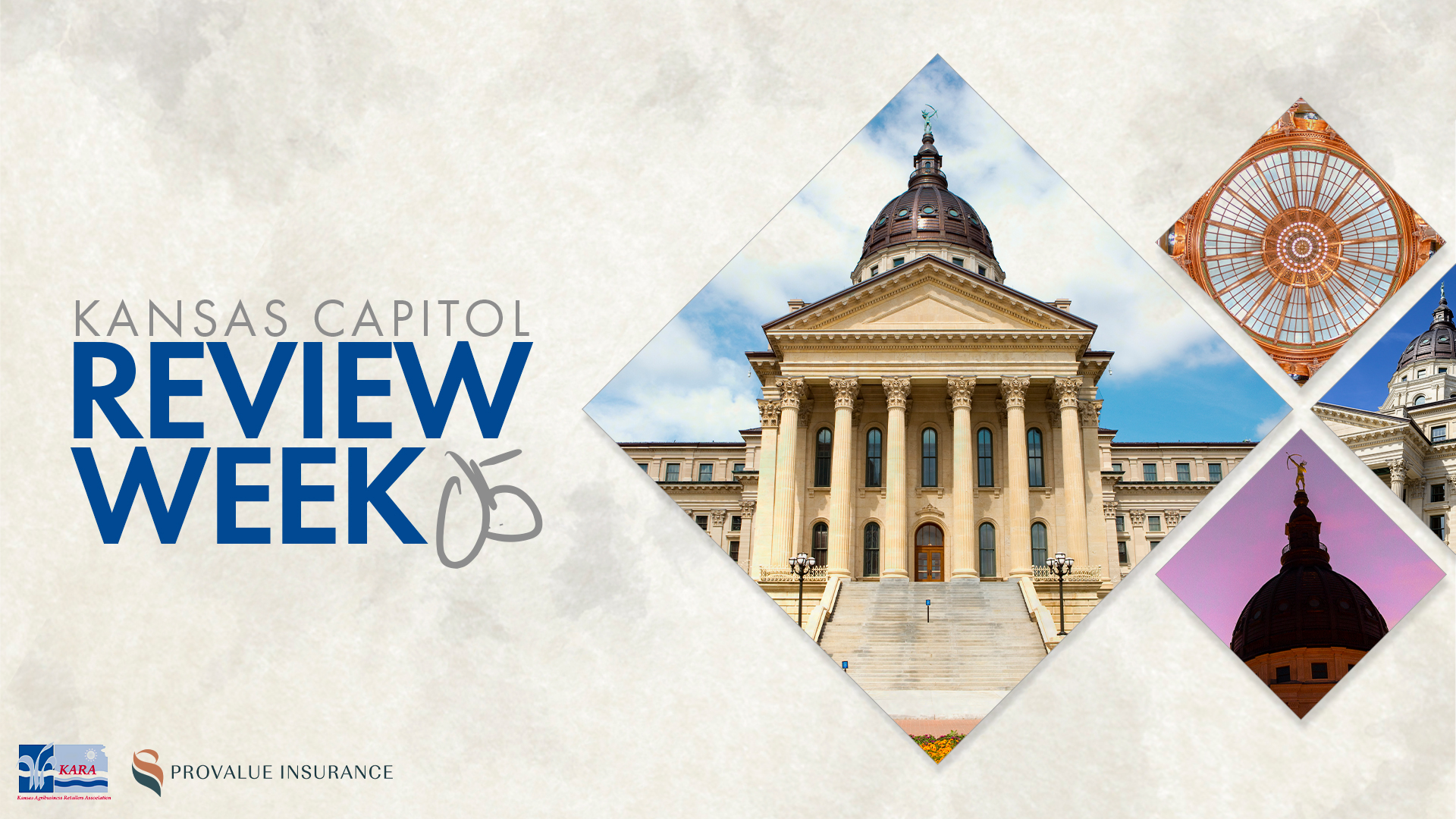 Posted at 08:44h in Advocacy by Editorial Team
0 Likes

Last week concluded Week 5 of the 2020 Kansas Legislature. Activities sped up again in the capitol building, especially in the House and Senate Tax Committees. Please find a summary of highlights of the week below.

On Thursday, the House Committee on Taxation held a hearing on House Bill 2517, a bill which would allow a property owner to apply to the county commission for an abatement or credit of property taxes that are levied against an agricultural improvement property that is destroyed or substantially destroyed by a natural disaster. The Kansas Grain and Feed Association joined with the Kansas Cooperative Council to testify in support of the measure while asking for the bill to be extended to include public grain warehouses to ensure parity with producer-owned grain storage facilities. A similar bill, Senate Bill 242, was heard in the Senate Tax Committee earlier in the week, and a similar amendment was requested.

This week, the Senate Tax Committee passed the following bills out of committee favorably for passage:

Hearings on the Kansas Department of Transportation’s next 10 year state transportation plan have been scheduled for Tuesday, February 18, 2020 in the Senate Ways and Means Committee and the House Appropriations Committee. The plan in set forth in House Bill 2588 and in Senate Bill 375. The “Forward” plan replaces the now-expired T-Works program with a series of two-year reassessments of the state’s transportation and communication needs, including: maintenance and preservation projects, state highways, bridges, broadband and other communications and transportation systems. The initial phase of the program will include completion of the $435 million in T-Works projects that had been delayed due to budget shortfalls. The new program will be re-evaluated/restructured every two years to maintain flexibility and relevance with the needs of state/community/industry groups. Governor Kelly has stated her intention to no longer use money from the state highway fund to balance the state budget, but to use those funds for preservation, maintenance, expansion and modernization.

On Thursday, February 13, 2020, the House Committee on Agriculture passed House Bill 2432 out of committee favorably for passage. The bill would establish the Kansas Pesticide Waste Disposal Program and Fund within the Kansas Department of Agriculture. The program would be funded by an annual transfer of no more than $50,000 from the Kansas Agricultural Remediation Fund.

On Wednesday, February 12th, the House Commerce Committee amended House Bill 2507 at the request of the Kansas Association of School Boards, and moved the bill out of committee favorably for passage. This bill addresses a business’ exposure to liability from injury to a student participant in a school-sponsored work-based vocational programs at their worksite. The intent of the bill is to cover the student during these activities in the same manner as they would be covered during school-sponsored sports activities or shop classes.

On Wednesday, February 12th, the House Committee on Federal and State Affairs amended House Bill 2411 and then passed the bill out favorably for passage. The bill would roll back certain changes made by legislation passed in 2018 which amended the Rules and Regulations Filing Act to place heightened scrutiny of fiscal notes on proposed state agency regulations. Kansas Grain and Feed Association, Kansas Agribusiness Retailers Association and Renew Kansas Biofuels Association testified on the bill, requesting certain specific changes to the bill. The three aforementioned associations worked with other stakeholders on the amended language to ensure that the net fiscal impact of a regulation includes all new costs on industry.

On Friday, February 14, 2020, the Senate Committee on Agriculture passed the following bills out of committee favorably for passage:

On Wednesday, February 12th, the Senate Committee on Agriculture passed SB 153 out of committee favorably for passage. The bill would authorize KDHE to establish reportable threshold quantities of chemical spills in rules and regulations. The bill would also allow the agency to provide technical guidance during a clean up response, and permit cost-recovery from the responsible party for any state expenses for response to a release.  The bill would also provide the ability to levy penalties for illegal dumping, the lack of or refusal of the responsible party to clean up a release, or the lack of timely reporting of a release. The agency amended the bill in committee to limit the effect of agriculture chemicals and require a maximum amount of civil penalty.

On Wednesday, Feb. 12, 2020, the Senate Committee on Judiciary held a hearing on SB 344, a bill which would seek to remove the photograph requirement for all customers seeking to recycle certain types of metal listed within the scrap metal theft reduction act. The legislature made amendments to the Scrap Metal Theft Reduction act in 2019 to extend the life of the program and require additional record keeping of certain scrap metal recycling transactions. A large scrap metal recycling company proponent stated that they were concerned with the privacy of their customers, and stated that the photograph requirement was overly burdensome.

On Wednesday, February 12th, your association joined with other industries in testifying before the Senate Ways and Means Subcommittee on a funding need for the Bureau of Air Quality of the Kansas Department of Health and Environment. We asked the committee to review the Bureau’s budget needs, as the Bureau has informed industry that it intends to increase air quality emission fees on Class I and Class II emitters by approximately $1.5 million in 2020 and every year thereafter.

On Tuesday, February 11th, the House Committee on Agriculture received a briefing from the Kansas Dept. of Agriculture’s (KDA) Division of Weights and Measures on its various weights and measures inspection programs following and audit of the program by the Legislative Division of Post Audit. KDA testified that large truck scales are found out of tolerance during about 50 percent of inspections. KDA indicated that there are approximately 20 large scale inspection companies licensed to operate in Kansas. KDA indicated that they generally do not assume malicious behavior unless a problem has been cited and is not corrected during a follow-up inspection.

On Monday, February 10th, the Senate Committee on Transportation held a hearing on Senate Bill 267, a bill which would clarify that a violation for failure to securely tarp or cover a load should be cited as a traffic infraction, rather than as a misdemeanor. Your association submitted testimony agreeing that violation for failing to securely cover a load of grain would be more appropriately cited as a traffic infraction, and should not be cited as the (higher) category of a misdemeanor driving offense. Proponents stated that a misdemeanor designation is inappropriate for this type of infraction, and in some instances, have caused confusion and frustration for drivers who may have to return to the area in order to appear before a municipal court. The bill was intended to address the hauling of silage and ag commodities, but as drafted would, apply to all loads of all kinds, not just ag commodities. During the hearing, there was discussion about limiting the bill to just ag commodities.

On Monday, February 10th, the House Committee on Agriculture held a hearing on HB 2463, a bill which would amend the forms of financial responsibility allowed by commercial pesticide applicators. Existing law provides the means by which a pesticide business may prove financial responsibility in order to obtain a license.  The bill would remove the provision of a letter of credit or bond from those means. Your association testified as neutral on the measure.