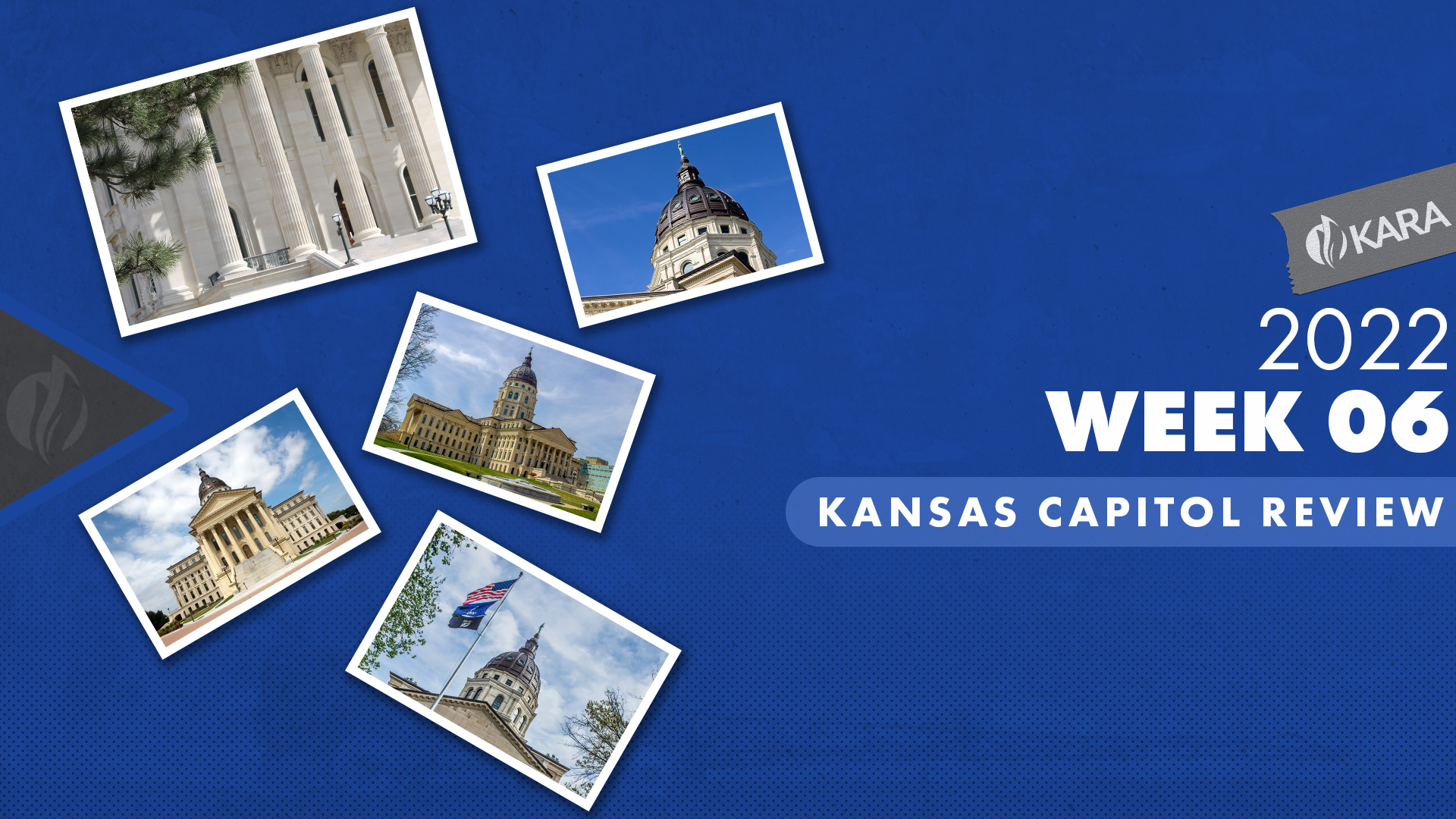 Posted at 08:31h in Advocacy by Editorial Team
0 Likes

The Legislature passed a Republican-friendly Congressional redistricting map last week (Sub Senate Bill 355), overriding Governor Laura Kelly’s veto. As anticipated, multiple legal challenges to the bill were filed. Major floor action in the House this week included the attempted passage of a resolution on a proposed constitutional amendment giving the Legislature oversight of rules and regulations adopted by executive branch agencies. The vote failed to gain the super majority votes required to pass, but it will likely come up for reconsideration on Monday. In the Senate, the Senate Tax Committee passed a large bill full of tax cuts, including reductions in property taxes and a new sales tax holiday for school supplies. The bill would also eliminate a 1.5-mill property tax set aside for buildings at state universities, state hospitals, veterans’ homes, and schools for the deaf and blind, with the intent being to appropriate the necessary funds directly from the state general fund.

Kansas currently uses a three-factor system for apportioning income between states for corporate income tax purposes. House Bill 2186 is a bill that would allow corporate taxpayers the option to elect which methodology to use when apportioning their corporate income between Kansas and other states in which it operates to determine tax liability. The proposed legislation would allow certain taxpayers, based on NAICS codes, to elect to use a single-factor apportionment formula based on sales to determine corporate income tax liability. The bill may have a cost to the state of approximately $20 million. The House Tax Committee held a hearing on the bill, and the Kansas Chamber of Commerce offered language to amend the bill to include additional NAICS codes requested by industry, including 541690 and 112210. Kansas Grain and Feed Association submitted testimony in support of the measure. The committee intends to take final action on the bill on Monday, February 21.

This week, the House Water Committee held two days of hearings on House Bill 2686, a bill rewriting much of the existing structure of Kansas water law. The bill would: create the Kansas department of water and environment within the executive branch of government; transfer certain powers, duties and functions regarding water; abolish the Kansas water office, the Kansas department of health and environment, division of environment, the Kansas department of agriculture, division of conservation and the Kansas department of agriculture, division of water resources; establish a water and environment maintenance fund; modify procedures for elections of the board of directors for a groundwater management district, board of directors eligibility, definition of eligible voter and term limits of board of directors; require groundwater management districts to submit annual financial reports to the legislature and to submit water conservation and stabilization plans to the chief engineer; create a water usage fee for irrigators; increase water fees for public water supply systems, industrial use and stock watering permit holders; establish a civil penalty for obstructions in streams violations and creating the water structures emergency fund. Many opponents from the agriculture industry – including the Kansas Agricultural Alliance – pushed back on the new fees, GMD board requirements, and the placing of water quality and quantity regulation within one agency. The committee is scheduled to take final action on the bill on Monday, February 21.

Legislation on regulatory reform is being advanced this year. House Bill 2087 would amend a law requiring review of economic impact of proposed regulations by the state budget director. The Senate amended the bill to reduce the review threshold from $3 million to, $1 million, in order to increase the number of regulations reviewed by the state budget director. The Senate passed the bill on a vote of 39-0, and it now goes back to the House to either concur or non-concur with the Senate amendment.

Also, as amended this week, Senate Bill 34 would require a five-year review of all agency regulations and allow for a 15-day quick repeal process for outdated regulations. The Senate will likely take this bill up for consideration next week.

In addition, House Concurrent Resolution 5014 and Senate Concurrent Resolution 1618 would propose a constitutional amendment to increase legislative oversight of agency regulations. If approved by two-thirds of the legislature, the amendment would go before Kansas voters in the 2022 election. SCR 1618 received a hearing in the Senate Judiciary Committee this week, and the committee will likely work the bill on Monday, February 18. In addition, after failing to garner the 2/3 majority vote in the House this last week, we anticipate a motion for reconsideration on Monday for HCR 5014.

Senate Bill 318 would allow for a sales tax exemption for purchases to reconstruct, repair or replace certain fencing damaged or destroyed by wildfires across the state in December. This week, the House Tax Committee amended the bill to remove language added by the Senate providing property tax abatements following disaster and destroyed property and removed a provision creating a sales tax exemption for all fencing materials and services used for enclosing agricultural land and created a substitute bill.

Senate Bill 463 would allow retailers to retain 1.5 percent of the retail sales and compensating use tax that they collect each month up to $300. Any retailer that files a consolidated return for reporting retail sales and compensating use tax prior to January 1, 2022, would be subject to the $300 per retailer limitation. The Senate Tax Committee heard the bill this week and then passed it out favorably. The bill would decrease sales tax revenue to the state by an estimated $50 million in fiscal year 2023.

This week, the House Agriculture Committee took final action on House Bill 2563. Introduced at the request of the Kansas Dept. of Agriculture (KDA), the bill would make comprehensive changes to the Kansas Seed law, including authorizing the agency civil penalty authority over the seed industry. Last fall, Kansas Agribusiness Retailers Association (KARA) worked closely with the agency to amend the proposed language in the bill. KARA requested an amendment to remove language allowing the agency authority to assess a new penalty each day for a continuing violation. The committee adopted this amendment and passed the bill out favorably as amended.

This week, the House passed House Bill 2560 favorably. The bill would authorize the KS Dept. of Agriculture to extend current fees assessed on agribusiness without raising the fees. The bill would also extend, to 2030, the existing water right transition assistance program (WTAP) administered by the agency. The agribusiness industry testified neutral on the bill and explained to the committee that fees on agribusiness are currently higher than most neighboring states and the associations would oppose any attempt to increase the fees. Kansas Agribusiness Retailers Association testified neutral on this bill, which now advances to the Senate for consideration.

Kansas law prohibits the seller or lessor in any sales or lease transaction or any credit or debit card issuer from imposing a surcharge on a card holder who elects to use a credit or debit card in lieu of payment by cash, check or similar means. A surcharge is defined as any additional amount imposed at the time of the sales or lease transaction by the merchant, seller or lessor that increases the charge to the buyer or lessee for the privilege of using a credit or debit card. House Bill 2316 was introduced to eliminate this prohibition and allow the imposition of a surcharge. This week, the Senate Tax Committee held a hearing on the bill, where Kansas Agribusiness Retailers Association provided proponent testimony.

Kansas has the highest energy rates in our region. Multiple bills were introduced this week targeted at either lowering those rates or stemming any increase in the rates. This week, the Senate Utilities Committee held a hearing on Senate Bill 349, prohibiting the Kansas Corporation Commission (KCC) from approving any increase in retail electric rates for an electric public utility that would result in an annual increase of greater than 1.0 percent when compared to the preceding calendar year’s total retail rates or an average of 1.0 percent per year if the electric public utility does not file for a rate increase in two or more subsequent years.

House Bill 2394 would establish a 6.5 percent research and development tax credit for LLCs and small businesses. Currently, Kansas law provides this tax credit for corporations only, and has a one-time transferability. The tax credit is based on the amount above the average of actual qualified research and development expenses in the tax year and the previous two tax years. HB 2394 would allow all taxpayers the ability to claim this tax credit and increases the initial tax credit calculation from 6.5 percent to 10.0 percent. The House Tax Committee held a hearing on the bill on Wednesday, February 16.

House Bill 2623 would enact the Rural Remote Worker Incentive Act, allowing for any expanding or new business that created a minimum of five net new remote jobs in rural areas of the state to apply to the Secretary of Commerce for a cash incentive payment of $4,000 per net new rural remote job created. A “rural area” would be defined as a city with a population of 60,000 or less located in a county with a population of 80,000 or less, or a county with a population of 40,000 or less. The bill would include requirements for the incentives and create the Rural Remote Worker Incentive Fund. The total amount of cash incentive payments out of the fund would be limited to $600,000. The House Committee on Financial Institutions and Rural Development held a hearing on the bill on Monday, February 14, and has scheduled final action for Monday, February 21.

Ag Use of County Right-of-Ways

House Bill 2531 would permit, upon approval of the county commission, any person engaged in an agriculture activity to construct and operate pipelines in pursuit of an agricultural activity along, upon, under, and across the right-of-way of any county or township road in conformity with the laws and regulations of the State of Kansas and the county in which the pipeline is located. The bill was brought following a District Court ruling in Philips County in which the judge found the county did not have authority to permit a swine producer to place an effluent line in the county right-of-way through a neighboring property, and that the pipeline created a trespass and nuisance by the swine producer. Considerable civil damages were assessed against the swine producer. The House Agriculture Committee held a hearing on the bill on Monday, February 14, where many conferees testified, both proponents and opponents. The Committee has scheduled final action on the bill on Monday, February 21. It is thought the bill will likely be amended before being passed out of committee.