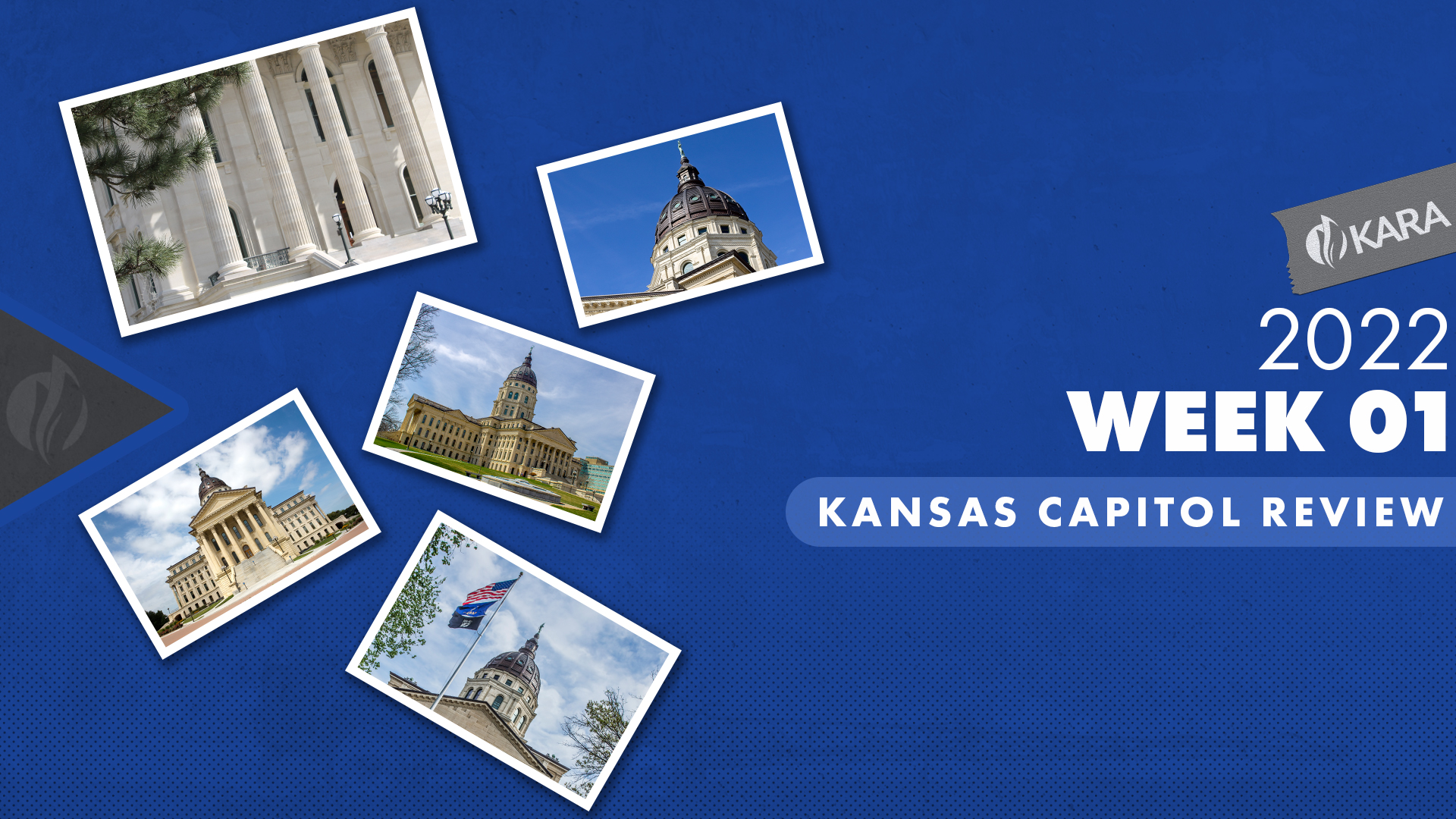 Posted at 08:50h in Advocacy by Editorial Team
0 Likes

The Kansas legislature gaveled in on Monday, January 10, 2022, and your Association’s government affairs staff was at the capitol monitoring and weighing in on bills affecting our industry. It was a busy week in Topeka which saw hearings on various tax issues related to wildfires in the state and Governor Laura Kelly’s State of the State address. Key issues this session will include reapportionment and redistricting following the 2020 census, a Senate vote on the “Value Them Both” constitutional amendment question on abortion, possible legalization of medical marijuana, and deliberation of how to most appropriately spend the projected $2.9 billion ending balance – either through tax cuts (such as removal of the sales tax on food), or the paying down of outstanding debt (such as KPERS, the state employee retirement system).

KDA is proposing amendments to the Kansas Seed Law which have been reviewed by your Association. KARA has worked with the agency to ensure that we are able to support the draft bill, which will be introduced soon by the agency.

In Governor Kelly’s annual State of the State address, the Governor doted on our state’s low unemployment rate, which has been below 4% for more than a year. The Governor also focused on her policy goals this year, which include: (1) pursuing responsible tax policy, to include full elimination of the sales tax on food, and a one-time income tax return to taxpayers of $250 per person or $500 per married couple; (2) investing in rural Kansas, to include investments in broadband, and the rural housing shortage; (3) investing fully in the state highway plan and other transportation infrastructure, to include short line rail; (4) fully funding Kansas K-12 education; (5) fully funding the state water plan as required by Kansas law, for the first time in 15 years; (6) putting a freeze on increases in the cost of college tuition; and (7) adding $600 million dollars to the state’s “Rainy-Day fund”.

Aside from passing a budget one of the main objectives of the 2022 Legislature will be adopting new maps and boundaries for the legislature, statewide elected seats, state school board, and our state Congressional districts. Demographic shifts have shown large population movements from rural areas to more urban areas of the state. This will likely result in larger rural legislative districts, and possibly new districts in more urban areas. Kansas was fortunate it did not lose a congressional district as a result of the 2020 census. During the last redistricting, in 2012, the legislature was unable to agree on the boundaries which resulted in the 2012 maps being drawn up by the court.

Kansas currently uses a three-factor system for apportioning income between states for corporate income tax purposes. House Bill 2186 would allow corporate taxpayers the option to elect which methodology to use when apportioning their corporate income between Kansas and other states in which it operates to determine tax liability. The proposed legislation would allow certain taxpayers, based on NAICS codes, to elect to use a single-factor apportionment formula based on sales to determine corporate income tax liability. The bill may have a cost to the state of approximately $20 million.

In the House Tax Committee this week, a hearing was held on House Bill 2464, a bill which would provide a sales tax exemption for purchases to reconstruct, repair or replace certain fencing damaged or destroyed by wildfires across the state in December. The Committee is scheduled to take final action on the bill next week. The Senate Tax Committee held a hearing on similar legislation, Senate Bill 318. The committee amended the bill to allow county commissioners to provide a property tax exemption for properties that were damaged during a natural disaster. The committee then passed the bill out favorably as amended.

This week, the Utilities Committees received a presentation from the Kansas Corporation Commission on the severe effects suffered by Kansas residents and businesses during winter storm “Uri” in February 2021. The severe cold temperature from the storm greatly increased the demand for electricity and natural gas over multiple days, which greatly increased the costs of electricity and natural gas in the state and region. Those price spikes prompted the passage of legislation in 2021 by the Kansas legislature which created state programs to assist Kansas entities in covering the costs of their natural gas bills. KCC explained that, prior to the storm, natural gas production had declined. Together with the increased demand for natural gas caused by Uri, Kansans experienced unprecedented price spikes across the region that were up to 250 times, or more, greater than the highest prices ever experienced previously. In addition, the wholesale price for electricity increased greatly during the winter storm. Further, natural gas providers placed “curtailments,” or reductions, in the amount of natural gas delivered to certain commercial facilities during Uri. This resulted in various other costs on those businesses.

Senate Bill 181 would establish a new Elevator Safety Act. The bill would require regulation of all elevators, man-lifts, and conveyance systems, and grant state inspectors the authority to adopt regulations over the industry and prohibit any inspections of elevators and conveyance equipment unless by a state-licensed company. Similar legislation adopted in other states increased costs on the grain industry substantially. The bill passed the Senate in 2021, and a hearing has already been scheduled on the bill in the House Committee on Federal and State Affairs for Tuesday, January 19. Your Association worked to amend this bill to exempt grain, feed, and biofuel facilities. For that reason, industry is neutral on the bill in its current form.

In 2020, the legislature passed the Eisenhower Legacy Transportation Program in Senate Bill 173. The program included a $15 million, 3-year, cost-share grant program (70/30) for maintenance and improvements to short line rail and rail siding. The program is a partnership between the public and private sector. In 2020, 2021, and 2022, KDOT set aside a percentage of the $5 million program funds specifically for industry rail siding. This funding has greatly benefited the Kansas grain industry. The third year of grants will be let in 2022, and your Association will seek an extension of this beneficial program either through the use of federal funds, state transportation funds, or a new appropriation of state general funds.

Regulations on industry add operating and administrative expenses. Legislation on regulatory reform will be advanced this year. House Concurrent Resolution 5014 would propose a constitutional amendment to increase legislative oversight of agency regulations. If approved by two-thirds of the legislature, the amendment would go before Kansas voters in the 2022 election. In addition, House Bill 2087 would amend a law requiring review of economic impact of proposed regulations by the state budget director. The Senate amended the bill to reduce the review threshold from a $3 million to $1 million threshold to increase the amount of regulations to be reviewed by the state budget director.

Kansas has the highest energy rates in our region. There may be hearings on the issue of high electric utility rates in response to Evergy’s stated plan to spend billions in additional capital expenditures in coming years, which would increase Kansan’s electric energy rates even more. Legislation will likely be introduced to reduce costs on rate payers while ensuring reliable service and still protecting the cooperative business structure that many rural members rely on for service.

In 2021, House Sub for SB 91 was introduced with the purpose of providing businesses with immunity from general liability for participating in work-based learning programs with students. Under the bill, schools would insure against this liability in the same way that they insure students during field trips and sporting events. This reasonable legislation is beneficial for businesses as they seek to increase the Kansas workforce. We anticipate final passage of the legislation in some form this year.

2022 Bill Tracker
For a complete list of the bills we’re tracking, please use the button below. If you have any questions or concerns contact Trae Green (trae@kansasag.org).