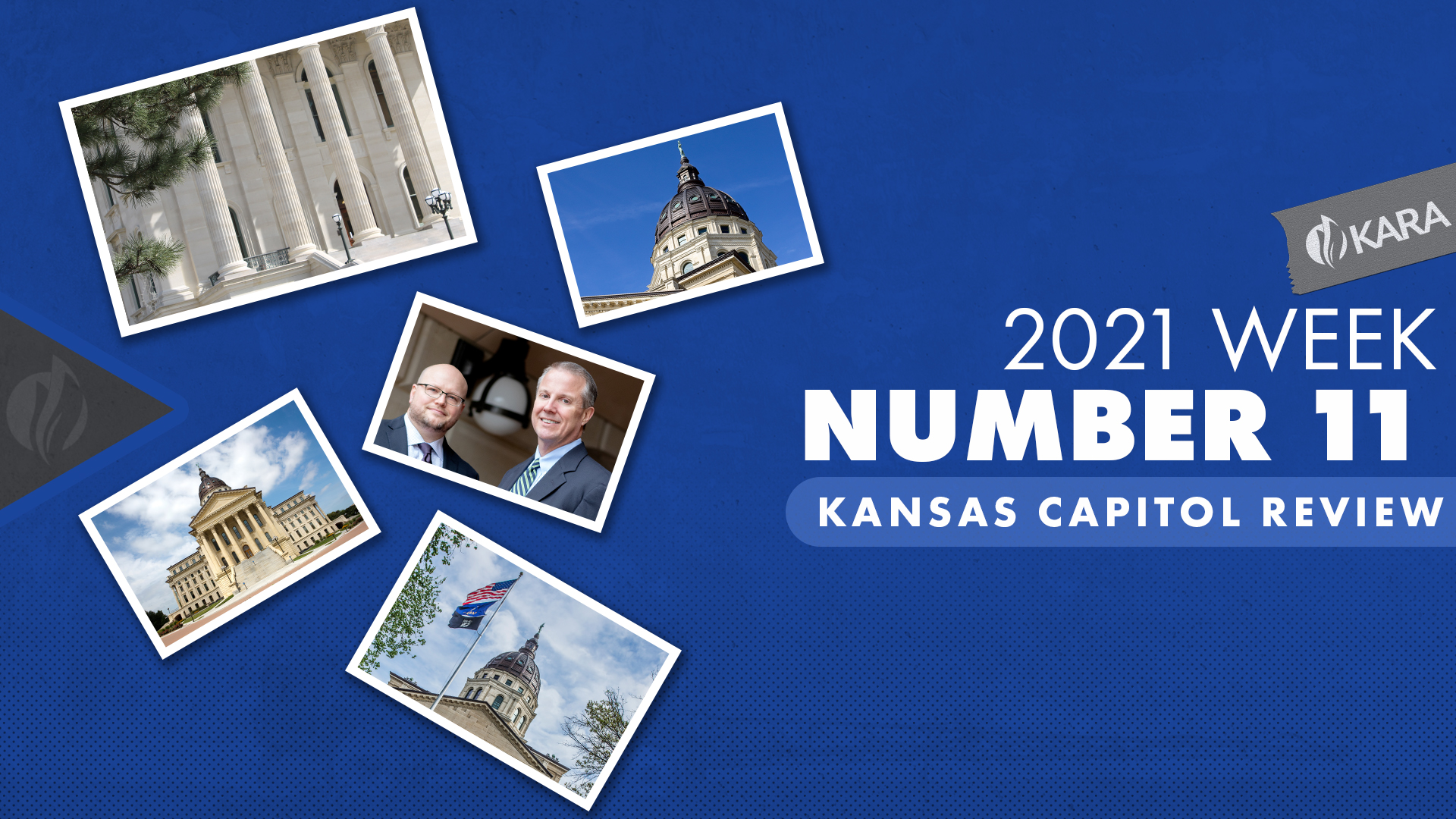 Posted at 07:52h in Advocacy by Editorial Team
0 Likes

Week 11 of the Kansas Legislative Session

Several days of floor debate by both chambers and final action for most committees made for a full week in the legislature. Much time was spent debating various bills, including a bill allowing regulated energy providers to bond long-term debt; and House Resolution 5015 urging the United States Congress to reject the “For the People Act of 2021.” Next week will bring additional floor debate on bills before the first adjournment on Friday, April 9. The legislature will then take a three-week break before returning for a brief veto session and to work on an omnibus appropriations bill.

Currently, all spills of hazardous chemicals must be reported to KDHE, regardless of the amount. House Bill 2155 would authorize the Kansas Dept. Health and Environment (KDHE) to establish, in agency regulations, reportable minimum quantities of hazardous chemical spills. This bill would also allow the agency to pursue cost-recovery from the responsible party for any agency expenses related to a response to a release. In addition, the bill authorizes KDHE to levy penalties for illegal dumping, refusal by a responsible party to clean up a release, or failure to timely report a release. KDHE has indicated that it intends to establish minimum thresholds in agency regulations that are consistent with federal requirements (EPA’s list of lists). Renew Kansas Biofuels Association, Kansas Agribusiness Retailers Association, and Kansas Grain and Feed Association testified in support of the bill. In previous years, these associations worked with KDHE to amend the bill to limit the total civil penalty authority and limit the effect on agriculture chemicals. The bill was passed by the House and the Senate, and has been presented to the Governor for consideration.

Senate Bill 38 would establish the Kansas Pesticide Waste Disposal Program, permitting up to $50,000 to be transferred annually from the existing Kansas Agriculture Remediation fund. Through this program, persons could apply to the Kansas Dept. of Agriculture (KDA) for assistance in covering the costs of appropriately disposing of pesticide waste products. On Thursday, March 25, the House took emergency final action and passed SB 38, as amended, with a vote of 121-1. The bill will now advances to the Senate for concurrence. If the chamber does not concur, the bill will move forward to conference committee.

Kansas has the highest electric utility rates in the Midwest. This week, the Senate passed Sen Substitute for HB 2072, a bill that would create the Utility Financing and Securitization Act (UFSA). The bill would allow for the securitization of utility assets to recover energy transition costs for certain regulated electric public utilities. The bill was amended to include language requiring any cost savings through bonding to be passed on to rate payers. The bill would also allow certain regulated electric and natural gas public utilities to pursue securitization to finance certain extraordinary expenses, such as fuel costs recently incurred during the extreme weather events.

On Friday, Governor Kelly signed into law Senate Bill 13, a bill that repeals the existing property tax lid put in place by the legislature in 2015. The tax lid generally required voters to approve any local property tax increase greater than the rate of inflation. However, a two-year delay in implementation of the tax lid allowed counties time to increase local property valuations and their local base-line budgets. In the short run, this only served to increase property taxes between 2016 and 2018. In exchange for repealing the current tax lid, SB 13 will seek to add greater transparency to the process for taxpayers, by requiring notice and public hearings in order for any taxing authority to increase taxes above a revenue neutral rate. Other provisions in the bill would prohibit valuation increases due to normal maintenance on a property, and allow the use of payment plans for property taxes.

Senate Bill 98 would ensure that, in a hearing before a Kansas District Court, the county retains the burden of proof on the county appraiser’s valuation and classification. The bill also extends the time a state board of tax appeals member may continue to serve after such member’s term expires. In addition, the bill would allow the Governor to temporarily appoint former board members as necessary. Kansas Grain and Feed Association and Renew Kansas Biofuels Association were proponents to the bill.

Senate Bill 119, explained in greater detail here, includes many positive changes to the Kansas property tax system that were spread out over a handful of bills last year. Of particular note, the bill would prohibit the Board of Tax Appeals from increasing the appraised valuation of property as a result of an appeal or an informal meeting concerning the property. Kansas Grain and Feed Association and Renew Kansas Biofuels Association testified as proponents.

Senate Bill 277 authorizes continuation of the 20 mill statewide property tax levy for schools and the exemption of a portion of residential property from such levy.

On Thursday, March 25, the House Tax Committee took action on Senate Bill 49, a bill which extends, for three years, an income tax credit for a Single City Port Authority. The tax incentive assists the short line to maintain track that services grain and agribusiness facilities. The committee moved the contents of Senate Bill 49 into Senate Bill 71, and then passed SB 71 out favorably. The bill was introduced at the request of Watco Railroad, and was supported by Kansas Grain and Feed Association, Kansas Agribusiness Retailers Association, and Kansas Cooperative Council.

This week, the Governor signed Senate Bill 40, a bill amending the state’s emergency management law, installing new checks on powers of the governor, health officers, and school boards to manage the COVID-19 pandemic and future disasters. The bill limits the power of the Governor, the state health secretary, and local public health officers to issue orders. It also gives Kansans more power to legally challenge emergency orders at all levels of government if they think their rights have been violated. The bill extends the Governor’s existing emergency declaration for the COVID-19 pandemic until May 28, 2021. However, under the provisions of SB 40, each executive order that the Governor had previously issued, related to the pandemic, will be revoked on March 31. For that reason, the Governor has announced that she will reissue 12 of her executive orders on April 1, 2021. Those new orders will remain in place until the emergency declarations end or they are rescinded. Any of the new executive orders (issued after March 31) will be subject to revocation by the Legislature.

Governor Kelly previously issued Executive Order 21-01 to provide “Temporary provisions for employer payment of income tax withholding for work performed in another State of Kansas.” Under the provisions of SB 40, the Governor has stated she intends to reissue this Executive Order after April 1, 2021. However, in the event that this executive order, and others, are revoked by the Legislature, an amendment with similar language may soon be placed on to House Bill 2106 in order to place the temporary extension of the withholding relief in Kansas law.

This week, the Senate Commerce Committee continued its hearing on Sub for House Bill 2196. As amended, this bill would provide for transfers of federal coronavirus relief aid or State General Funds to the Employment Security Fund in order to recover from the loss of hundreds of millions of dollars in fraudulent payments. It would create the Unemployment Compensation Modernization and Improvement Council, require the Kansas Department of Labor (KDOL) to modernize its information technology (IT) infrastructure, make temporary changes to the membership of the Employment Security Review Board, and alter the Employment Security Rates tables as well. In addition, it would provide for certain employer account protections, prohibit the continuation of federal unemployment compensation programs using state funds, adjust thresholds for maximum benefits, and make other employment security compensation changes. On Wednesday, March 24 the committee passed the bill out favorably, as amended.

On Tuesday, the House Taxation Committee took action on House Bill 2421, a bill that would provide corporate income tax modifications for global intangible low-taxed income, business interest, and capital contributions. During the hearing, the Committee placed the contents of House Bill 2421 into Senate Bill 50. The GILTI provision in Senate Bill 50 would make 100% of GILTI deductible (exempt) beginning in tax year 2021. The Committee also inserted into Senate Bill 50 the contents of HB 2239 (allowing net operating losses to be carried forward), and HB 2106 (extension of corporate filing deadline). The committee then passed Senate Bill 50 out of committee favorably for passage, as amended. The House Committee of the Whole will now consider Senate Bill 50. Senate Bill 50 has an estimated fiscal note (cost to the state) of $375 million. The fiscal note on a similar bill, Senate Bill 22, was closer to $500 million.

This week, Kansas Grain and Feed Association, Kansas Agribusiness Retailers Association and Renew Kansas Biofuels Association President and CEO President Ron Seeber joined other stakeholders in testifying in support of House Concurrent Resolution 5014 in a hearing before the House Judiciary Committee. HCR 5014 proposes a constitutional amendment to increase legislative oversight of agency rules and regulations. The resolution was brought forward by Attorney General Derek Schmidt, who has announced his candidacy for the Kansas Governor’s race in 2022. Currently, in Kansas, the Legislature does not have the lawful authority to veto state agency regulations. HCR 5014 would give the Legislature the power to veto administrative rules and regulations which have the force and effect of law. According to Schmidt, the proposed constitutional amendment is intended to give the Legislature “real and meaningful oversight over how regulatory agencies use the power entrusted to them by law.” If approved by two-thirds of the legislature, the proposed constitutional amendment would go before Kansas voters during the 2022 election.

Senate Bill 65 would amend the High Performance Incentive Program (HPIP) economic development program in order to decouple certain workforce training requirements from the program. Under current law, taxpayers that claim the HPIP investment tax credit are required to participate in either the Kansas Industrial Training (KIT) or Kansas Industrial Retraining (KIR) programs. The bill would decouple the tax credit from participating in those programs. Removing the training requirement from HPIP will provide more flexibility in using the training programs, and will likely increase the number of companies that qualify for the HPIP tax credit. The bill was amended by the House Committee on Commerce to allow transferability of up to 50% of the tax credit to any individual or entity. The committee also inserted the contents of Senate Bill 91, which would allow for a company to transfer earned but unused high performance incentive fund tax credits to another tax payer. The House passed SB 65, as amended, on Thursday, March 25. The bill now advances to the Senate for concurrence.

Other Bills of Interest

HB 2087 amending the review of certain regulations by the budget director. Senate Ways and Means amended to $1 million threshold and passed favorably

HB 2155 allowing minimum thresholds for reporting chemical spills to KDHE. Passed by House and Senate. Will go to Governor for consideration.

SB 52 authorizing a Sedgwick County Nuisance Abatement Act with agriculture exemption. Passed by House and Senate. Will go to Governor for consideration

SB 118 providing for dissolution of special districts. Passed by House and Senate. Will go to Governor for consideration.

SB 89 exempting the transport of agricultural forage commodities from secured load requirements. Passed as amended by the House.