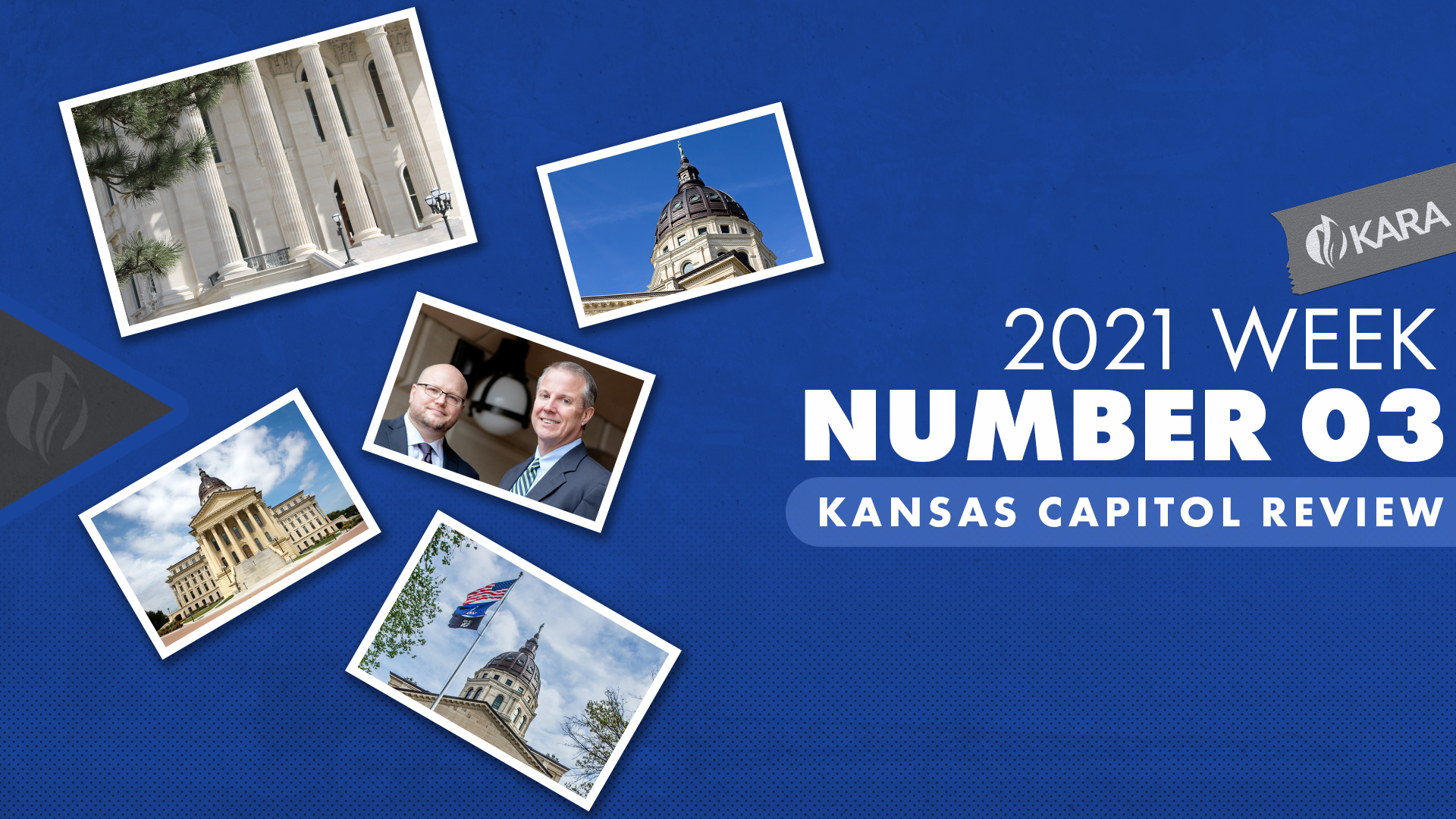 Posted at 09:36h in Advocacy by Editorial Team
0 Likes

Many new bills were introduced and heard by committees in the third week of the Kansas legislative session. The House and Senate also continued hearings on the status of the Kansas unemployment insurance fund, attempting to find answers on the amount of fraud against the fund and how the program might buoyed.

On Friday evening, Governor Laura Kelly appointed Amber Schultz as the new Secretary of Labor. Schultz, pending confirmation from the Senate, steps into the position with the need to update the Kansas Department of Labor’s 40-year-old IT infrastructure following, potentially, hundreds of millions of dollars being paid to fraudulent unemployment claims amid the pandemic.

Final action in the Senate this week resulted in passage of highly-prioritized legislation for House and Senate leadership in the form of a proposed constitutional amendment concerning the right to regulate abortion services in the state.

This week, House Bill 2155 was introduced which would authorize the Kansas Dept. Health and Environment (KDHE) to establish reportable minimum quantities of chemical spills in rules and regulations. Currently, all hazardous chemicals spills must be reported to KDHE, regardless of the amount. This bill would also allow the agency to provide technical guidance during a clean-up response, and permit cost-recovery from the responsible party for any state expenses for response to a release.

In addition, the bill would allow KDHE to levy penalties for illegal dumping, refusal by a responsible party to clean up a release, or failure to timely report a release.In previous years, your association worked with KDHE to amend the bill language to limit the effect on agriculture chemicals, and limit the civil penalty authority. KDHE has indicated that it intends to establish minimum thresholds in rules and regulations that are consistent with federal requirements. The bill is scheduled to be heard in the House Committee on Agriculture on Thursday, February 4.

Governor Kelly announced this week that the state has administered more than 2 million COVID-19 tests. Most recent numbers in Kansas include 272,517 positive cases resulting in 8,268 hospitalizations and 3,718 deaths.

The Governor referenced a national vaccine shortage as a cause of the slowed pace of immunization in Kansas.

She is encouraged, however, that states will soon receive a 16 percent increase in vaccines, and that the Biden administration has committed to a three-week distribution.

On January 25, the Governor signed Senate Bill 14, a bill extending certain provisions of the governmental response to the pandemic in Kansas. Specific to businesses, it provides that if a business was in compliance with public health directives then it is not liable for contraction of COVID-19.

Any civil action would require actual injury, not merely exposure, require a higher threshold of exposure than inherent risk. The bill also provides liability protections for companies manufacturing COVID-related PPE. The legislature will use the extended timeline from this bill to make additional changes to the Kansas Emergency Management Act this session.

This week, the Senate Committee on Financial Institutions passed Senate Bill 15 favorably. This bill would create a new Economic Recovery Linked Deposit Loan Program for businesses in response to the economic downturn caused by the COVID-19 pandemic. This 10-year program, administered by the State Treasurer, would allow up to $60 million available for low-interest businesses loans (2 percent below market rate). The loans would be capped at $250,000. Renew Kansas Biofuels Association joined other industry stakeholders in supporting the bill. On Monday, January 25, the House Committee on Financial Institutions and Rural Development held a hearing on a companion bill, House Bill 2069.

This past week, multiple House and Senate Committees continued informational hearings on the Kansas Employment Trust fund (KETF) – the state unemployment insurance fund. The committees received information on the balance, solvency, number of applicants, and challenges such as fraud on the fund. At the beginning of calendar year 2020, KETF had a balance of approximately $1 billion.

As of January 9, 2021, however, the fund had been spent down to $302 million. While the Kansas Dept. of Labor (KDOL) has indicated that the fund would be solvent through June 30 of this year, republican legislators are beginning to question whether it is sustainable. This decrease was largely due to the increase in unemployment claims during the COVID-19 pandemic. Last June, KDOL reported a backlog of 25,000 applicants to the fund.

This has now been reduced to just 40 applicants. According to Jeff Oswald, President of Unemployment Insurance Services, Kansas is unique in its vast number of fraudulent claims. Since October 1, 2020, 16,600 fraudulent claims have been filed in Kansas, and 4,000 have been filed since January 1st of this year. Employer payments into the fund have held at a set rate. Committee discussion on how to mitigate fraud on the fund focused on improving fraud tools, stronger verification of applicant identity, and securing more funding for improved technology.

In addition, on Friday, Governor Kelly appointed Amber Schultz as the new Secretary of Labor (pending Senate confirmation). There are hopes that this permanent leadership will help to solve the problems with systemic fraud.

Both the House and Senate have reintroduced the pesticide waste disposal bill that was heard last session. Introduced as Senate bill 38 and House Bill 2103, the bills would establish the Kansas Pesticide Waste Disposal Program, permitting up to $50,000 to be transferred annually from the existing Kansas Agriculture Remediation fund.

Through this program, persons could apply to the Kansas Dept. of Agriculture (KDA) for assistance in covering the costs of appropriately disposing of pesticide waste products. The Senate and House Agriculture Committees held hearings on the bills this week, and your association testified in support of the bills. Other proponents included KDA, Kansas Dept. Health and Environment, Kansas Cooperative Council, Kansas Farm Bureau, Kansas Sierra Club, and various commodity groups.

Senate Bill 38 was passed favorably from committee, and will now be considered by the full Senate. The House Agriculture Committee is scheduled to take final action on House Bill 2103 on February 4.

The proposed legislation would allow certain taxpayers, based on NAICS codes, to elect to use a single-factor apportionment formula based on sales to determine corporate income tax liability. No bill number had been assigned as of Friday, January 29.

The House Committee on Agriculture received reports from the Kansas commodity commissions this week. Kansas Corn reported that 766 million bushels of corn were produced, only topped by the crop of 800 million bushels in 2019. Four fuel retailers created infrastructure and took advantage of the U.S. Dept. of Agriculture’s higher blends infrastructure incentive program. The checkoff refund percentage was just 8 percent. About one-third of the Kansas corn crop is used to directly feed livestock.

The Kansas Soybean Commission indicated there were increased soybean acres across the state last year, resulting in a 190 million bushel harvest, up 2 percent from 2019. Soybeans across the state tallied an average per-acre-yield of 40.5 bushels.

Kansas Sorghum reported a 17 percent harvest increase and a 15 percent increase in acres over 2019. Average bushels-per-acre was up one bushel at 86. Kansas still ranks as the top sorghum producer in the United States, and it is expected that China might seek to purchase the majority of Kansas grown sorghum next year – which is already pushing up the price for this commodity.  Kansas Wheat indicated that 2020 had a 281 million bushel harvest, down 19 percent from 2019. Kansas wheat acres harvested were down 4 percent at 6.25 million acres. Wheat yield was 45 bushels-per-acre, down seven from 2019. Approximately half the 2020 wheat crop was exported outside of the U.S.

Both the Senate and House have introduced bills regarding a Promise Scholarship Program which provides scholarships for students working toward certain two-year degree programs, career and technical certificates, and other stand-alone programs.

The program is intended to increase available workforce and meet the needs of business and industry. The Senate Committee on Education heard the measure as Senate Bill 43. The House Committee on Commerce, Labor, and Economic Development will hear a similar measure in House Bill 2182. This bill includes the same scholarship program, but it also authorizes schools to pay tuition to post-secondary schools for dual or concurrently enrolled students.

In addition, it includes a provision from previous legislation which requires school districts to provide injury or loss insurance for work-based student learning programs.

This week, the Senate Committee on Local Government held a hearing on SB 52, a bill which would establish the Sedgwick County Urban Area Nuisance Act. The bill would permit the Board of Sedgwick County Commissioners to order the removal or abatement of any nuisance from any lot or parcel of ground within the unincorporated area of the county. Your association is working with other agricultural stakeholders to amend the bill to ensure that it would not affect commercial grain elevators or agricultural retail facilities.

On Tuesday, January 26, the Senate Committee on Federal and State Affairs held a hearing on Senate Bill 34, a bill that would create an automatic sunset, or repeal, of each current agency rule and regulation after five years.

In order for a rule or regulation to not be repealed, the bill would require that legislature, at that time, pass new legislation to renew or retain the rule or regulation. The bill received mixed reviews from stakeholders with many organizations lining to support or oppose the bill.

On Monday, January 25, the House Commerce Committee held a hearing on House Bill 2097, relating to the High Performance Incentive Program (HPIP) economic development program. The bill would decouple certain workforce training requirements from the program. Under current law, taxpayers that claim the HPIP investment tax credit are required to participate in either the Kansas Industrial Training (KIT) or Kansas Industrial Retraining (KIR) programs.

HB 2097 would decouple the tax credit from participating in those programs. Removing the training requirement from HPIP will provide more flexibility in using the training programs, and will likely increase the number of companies that qualify for the HPIP tax credit.