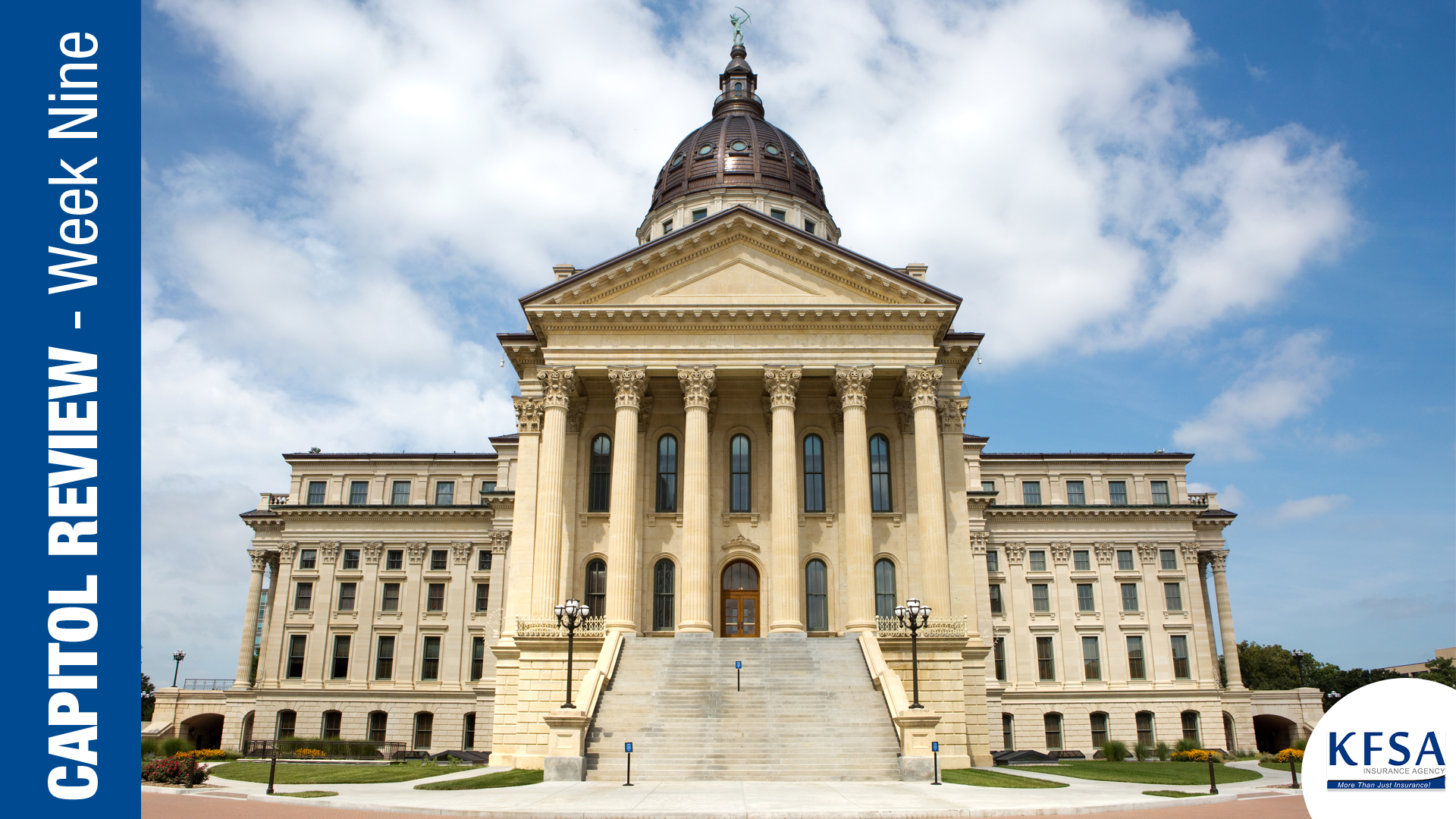 Posted at 10:40h in Advocacy by Editorial Team
0 Likes

The pace continued to pick up as lawmakers churned through bills in the 2019 legislature’s ninth week of session. The Senate sent a major tax bill to Governor Laura Kelly, who also signed House Bill 2001, extending the sunset of the Kansas Ag Chemical Remediation program to 2030, into law on Thursday. Read below for highlights of the session’s ninth week and a look ahead of what’s still to come.

Agricultural Chemical Remediation Reimbursement Program and Fund
On Thursday, Governor Laura Kelly signed into law House Bill 2001. This bill extends the sunset of the Kansas Ag Chemical Remediation program to July 1, 2030. The bill also realigns the funding for the program by reducing environmental assessments on grain elevators and pesticide product registrations and increasing the assessment on fertilizer product registrants. Proponents of the bill include Kansas Agribusiness Retailers Association, Kansas Grain and Feed Association, Kansas Cooperative Council and Kansas Department of Health and Environment. This was the second bill of the 2019 session to be signed into law by Governor Kelly. The bill becomes effective upon publication in the statute book.

Senate Passes Major Tax Bill, Advances to Governor
On Thursday evening, the Kansas Senate, on a vote of 24-16, concurred with Senate Bill 22, as amended by the House. The bill had previously passed the House on a vote of 76-43. The bill decouples portions of the Kansas corporate tax code from the federal corporate tax code following passage of the 2017 Federal tax cuts and jobs act. The House amended the bill to include language which reduces the state sales tax on food by 1 percent (to 5.5 percent). The cost to the state budget on that reduction is $60 million annually. In order to pay for the sales tax reduction on food, the bill was also amended to require a tax on sales in Kansas conducted over the internet. The sales tax applies to businesses without a physical nexus with the state, and only after the first $100,000 in sales. The bill now advances to Governor Kelly for consideration, but the Governor has hinted that she will veto any tax cut bill this session. The amendments by the House were intended to give the Governor a reason not to veto the bill, as lowering sales tax on food has broad support.

Senate Passes Energy Rate Study Bill
On Thursday afternoon, the Senate on a vote of 38-1 passed Substitute for Senate Bill 69, a bill which authorizes a study of retail rates of Kansas electric public utilities. The Senate Utilities Committee substantially amended the original bill with compromise language between energy consumers and utilities. This comprehensive rate study bill will help the Legislature determine what steps to take to lower rates. The bill would require the KCC to select an independent organization to evaluate electric utilities and include input from residential, commercial and industrial customers, as well as advanced energy stakeholders. The bill would establish the issues the study must address and would require Kansas electric public utilities to provide relevant information upon request. The intent of the bill is to provide solutions for the Legislature to consider regarding how to lower rates in Kansas, and make Kansas rates more competitive with the region. The House Committee on Energy and Utilities will hold hearings on the bill on Tuesday, March 19, 2019 at 8:30 am in room 281-n of the capitol.

Senate Commerce Committee Considers Economic Incentive Transparency Bill
On Monday, Tuesday and Wednesday of this week, the Senate Commerce Committee held hearings on House Bill 2006. This bill would create a publicly available examination of economic development incentives for Kansas businesses, including tax credits and property tax exemptions of $50,000 or more annually.  The committee heard from the Pew Research Center and from the Dean’s Professor of Economics at Kansas University. The research center recommended following a model from Indiana, and the Dean’s professor recommended passage of the bill. The bill would authorize the Legislative Post Audit Committee to conduct a systematic and comprehensive review and evaluation of each “economic development program,” every three years.  The Post Auditor would include in each report: 1) A description of the economic development incentive program; 2) An assessment of the program’s design and administration; 3) An estimate of the economic and fiscal impact; 4) A “return on investment calculation,” as that term would be defined by the bill; and 5) Other information as requested by the Committee.  The House amended the bill to require confidential information to be redacted from any audit report.

Center for Entrepreneurship Tax Credit
On Tuesday, the House Commerce Committee held a hearing on Senate Bill 90, a bill allowing financial institutions to claim the Center for Entrepreneurship tax credit beginning in tax year 2019. The bill would also increase the maximum amount of tax credits that any one taxpayer could claim from $50,000 to $100,000; however, the total amount of tax credits that could be claimed for all taxpayers would remain at $2 million per fiscal year.  This bill is supported by the Kansas Bankers Association and was overwhelmingly approved by the Senate.

Scrap Metal Theft Reduction Act
On Monday, March 18th, the Senate Judiciary Committee will hold a hearing on Senate Bill 219, a bill which would amend the scrap metal theft reduction act by assessing an excise tax on scrap metal at $1.00 per ton. The bill will also create the scrap metal data repository fund, reduce scrap metal dealer registration fees, and authorize the Kansas Bureau of Investigation to administer a database to carry out the program.

Senate Committee Hears Highway Plan Bill
On Wednesday and  Thursday, the Senate Committee on Ways and Means held a hearing on, Senate Bill 186, creating a transportation planning program (TPP) for the next state highway plan. The bill would direct the Sectary of Transportation to initiate a TPP to plan, develop and operate or coordinate the development and operation of the various modes and systems of transportation in the state. The TPP would provide for the construction, improvement, reconstruction and maintenance of the state highway system. The TPP would provide for the selection of projects, allowing for flexibility to meet emerging and economic needs. TPP expenditures may include, but are not limited to, preservation projects; expansion and economic opportunity projects; or, modernization projects. Many associations and individuals testified in support of the bill. The Companion bill, House Bill 2372, will be heard in the House Transportation Committee on Tuesday, March 19th.